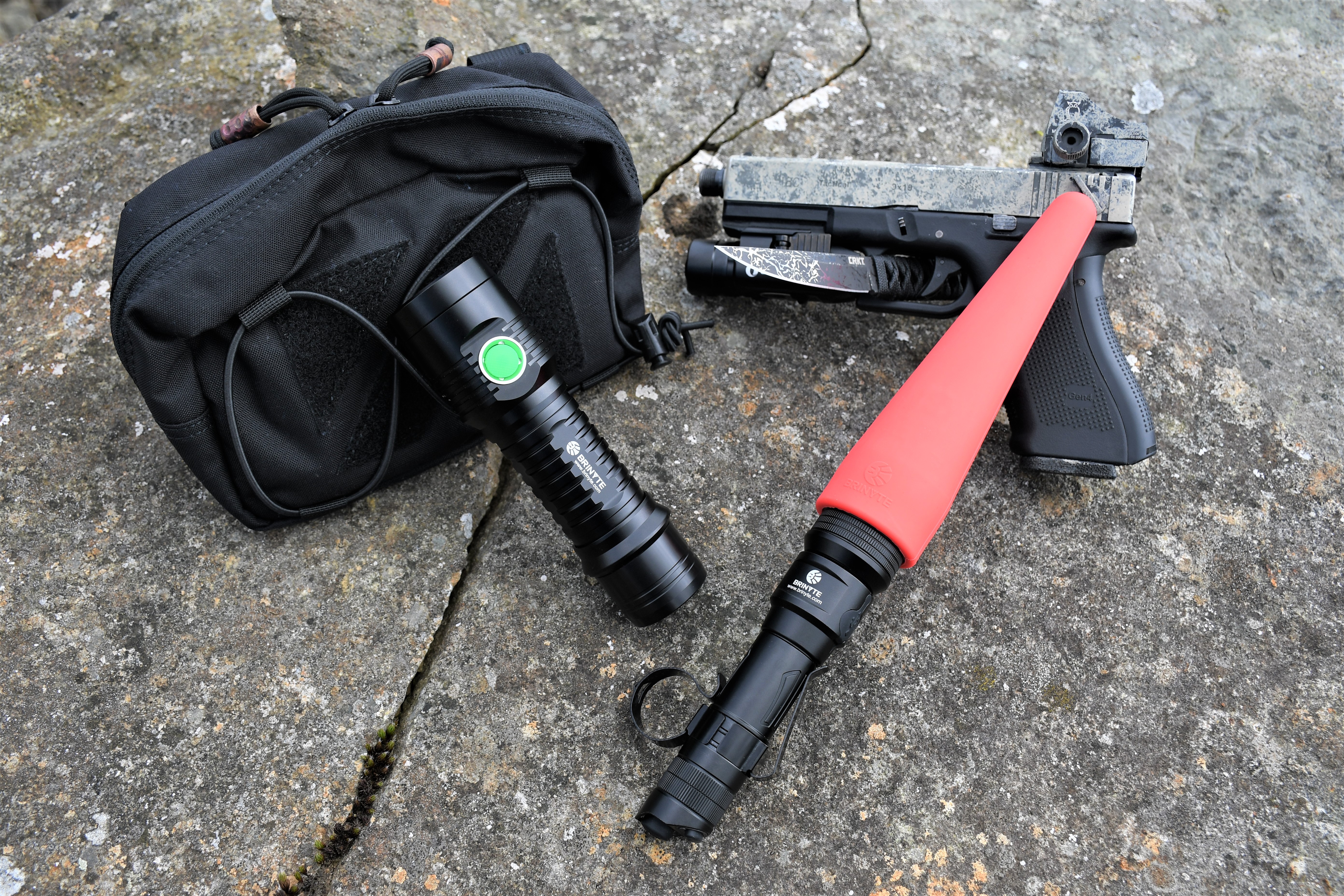 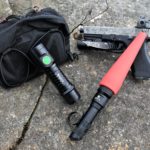 Brinyte have been very active recently in the flashlight market with their flagship model – which has just been released on Amazon US – the PT18 Oathkeeper (read my review of it here). The flashlight that I will be reviewing today, the WT01 Apollo, is perfect for S&R, thanks to the large reflector and long beam throw. So, let’s have a more in-depth look at the WT01!

Due to the fact that my WT01 Apollo is a review sample, it arrived in a plain cardboard box. However, when you buy this flashlight once it has been officially released, it will come in a much more decorative box.

With my sample, I received:

Now, some people prefer decorative boxes. I, however, prefer plain boxes as it normally keeps the overall cost down. The WT01 Apollo will be sold in a much nicer box once it is released. Like I said, everything arrived in a cardboard box which was fine with me, as that doesn’t really bother me. What matters is the fact that everything was nestling on a thick layer of black foam, which ensured that nothing got damaged during the long journey from China to the United Kingdom.

First Impressions of the WT01 Apollo.

Upon removing the WT01 Apollo from the bed of foam (and from the holster), it is clear that this flashlight means business! It feels well-made and looks well-made. Nice and chunky, the body is easy to grip when wearing gloves and the single side switch is easy to operate. There are two colour options: desert tan or black. I opted for black, as it meant that I received my sample faster.

The Body of the WT01 Apollo.

The springs are gold-plated which improve conductivity. This improves the efficiency of the circuit, which in turn means that less battery power is wasted

The body is quite thick, with deep trenches cut out. This allows heat to dissipate, as well as moisture to run off, preventing the WT01 from becoming slippery. This means that even in wet conditions, the WT01 Apollo can be used with ease. The flashlight can be broken down into two parts: the head and the body. The tail cap isn’t removable, however, this is what connects to the wireless charger.

The feature that is the most innovative about this flashlight is the fact that you can charge the unit without having to remove the battery. Generally, a micro-USB charging port is integrated into the design in order to accommodate this feature. The issue with this is that water and dust can enter the device much more easily. Enter the wireless charging dock. Simply take the WT01, insert the battery and set it on the charging stand. The flashlight starts charging through this system and automatically stops, but that isn’t the best bit. In the event of a power failure, the system detects the lack of electricity and automatically turns on at its lowest brightness setting which is 10 lumens.

Using a Luminus SST-40 LED wrapped in a smooth conical reflector, the WT01 Apollo has a maximum output of 1,100 lumens with a max beam throw of 320 metres. The beam intensity peaks at 25,475 candelas. Anti-reflective glass has been used for the optic, which allows almost all of the light generated to escape, as well as protecting the LED With an IP6-8 waterproof rating, you never have to worry about your new flashlight getting wet, as it is capable of being submersed at a depth of one metre in water. It is also highly resistant against the ingression of dirt and dust. It is impact resistant up to drops of one metre too, which is important for an EDC or duty flashlight. To combat heating, there are deep cooling fins around the head of the flashlight, which is effective in allowing the heat to dissipate.

The Outputs and Run-Times.

To cycle through the various modes, simply press the side switch when the flashlight is off. The light cycles from the brightest level to the lowest level. Hold the switch down for two to three seconds to access the hidden strobe mode. Press again to access the SOS mode, then press again to return to the normal lighting modes. The strobe mode has a frequency of 8Hz and it is very disorientating (I had a friend use it on me in the dark, so I can speak from experience!).

Integrated into the switch, there is a LED which turns green when fully charged. If the voltage drops below 5%, the red LED comes on to tell you to charge the battery in order to prevent over-discharge. The working voltage for this flashlight is 3.0V to 4.5V

Normally, when a flashlight comes with a holster, the holster isn’t of the best quality. This is an exception – this holster is one serious bit of kit!

Compatible with the PT18 Oathkeeper and the WT01 Apollo, it is constructed from a durable nylon, with circular cutouts at the top and bottom. This allows the tail cap of the PT18 to stick out, or it allows you to see if the WT01 Apollo is switched on.

I know of a few people who have had holsters catch on fire, as they didn’t realise that their flashlight was switched on. Now, thanks to design of this particular holster, you won’t have that issue.

There are two elasticated pockets at either side, which allows you to carry spare 18650 batteries (or a 26650 battery at a pinch). You can also carry pens in these side pockets, which is useful if you’re in law enforcement. The word “Brinyte” along with the “Brinyte” logo have been discreetly embossed on a small strip of faux leather near the top of the holster.

The 360o paddle is secured via two rivets to the holster on the rear of the flashlight and it clips onto your belt. Made from a durable polymer, the clip can be pulled back a significant distance and it still does not snap, which is impressive.

Below are several photos that I took of the WT01 Apollo on turbo (1,100 lumens):

In terms of improvements, there are only three things that I can think of: a moonlight mode (1 lumen output), a lanyard hole and also a lockout function. Moonlight modes are useful, as they allow you to preserve your night vision when reading things like maps. Lanyard holes mean that you can use a lanyard (no surprise there), which decreases the chance of dropping and damaging your new flashlight. In wet, windy weather, lanyards are more or less essential. Lockout modes are useful when travelling on long journeys, as they preserve battery power and also prevent the flashlight from burning a hole in belongings (seeing as the WT01 Apollo switches on at turbo). Apart from that, I can’t think of any other improvements that could be made. Brinyte have exceeded expectations and have produced a serious flashlight, perfect for S&R personnel, LE personnel and the serious EDC enthusiast.

If you want the Brinyte WT01 Apollo for yourself, it’s available for purchase only on Amazon and on the Brinyte website. The RRP for this product is £80.00.

Product sample provided by Brinyte in exchange for a detailed, unbiased review.