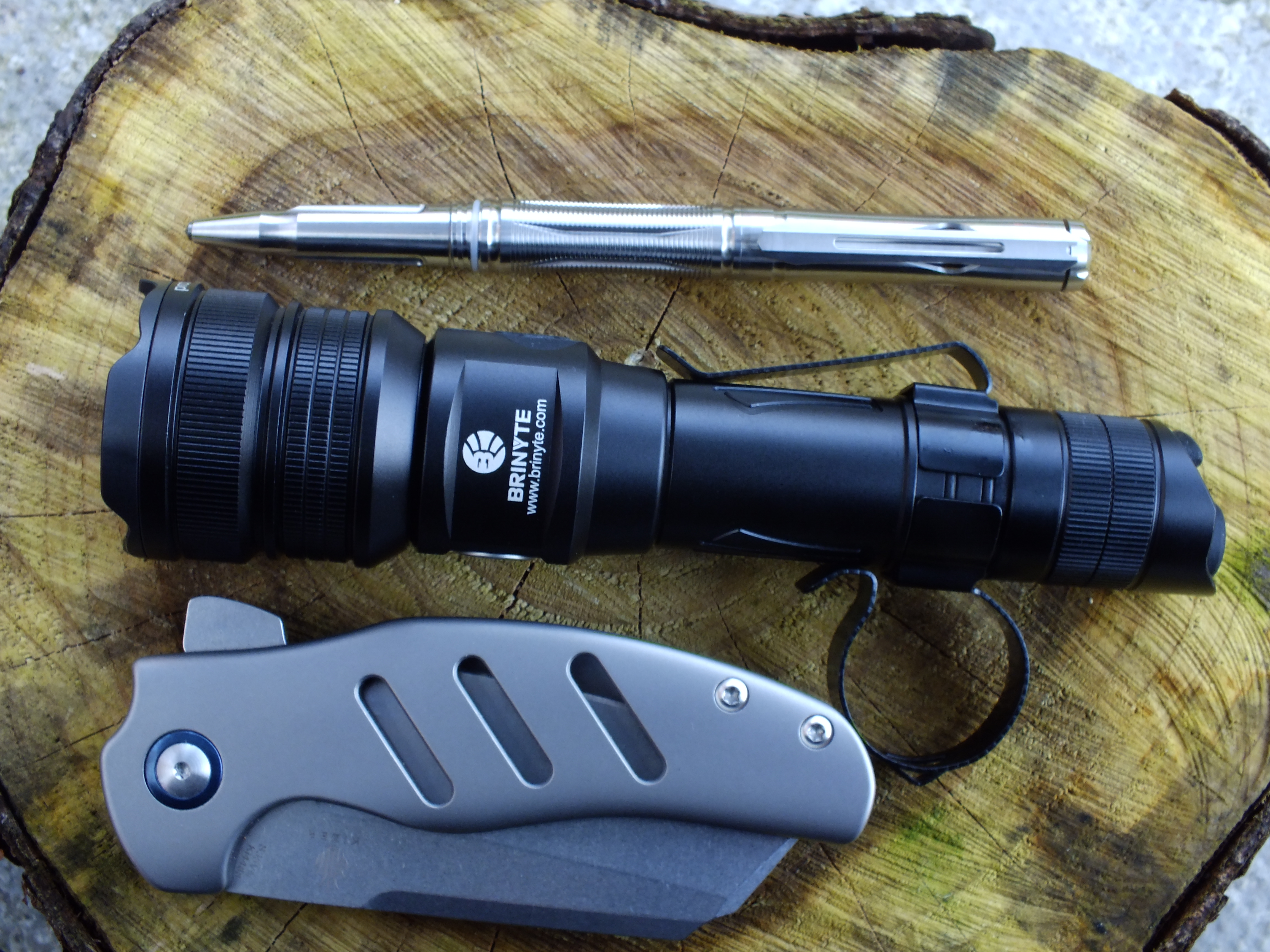 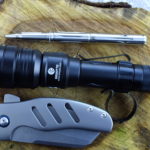 I hadn’t actually heard of this company before, until they started posting on Facebook revealing their new model of flashlight: the PT18 Oathkeeper. Several messages and weeks later, my very own Brinyte PT18 Oathkeeper Flashlight prototype arrived on my doorstep. I couldn’t have been more impressed.

The PT18 Oathkeeper comes in two colours: black and desert tan. I received the black version, because it was the only colour that was ready to ship at the time. The PT18 arrived in a plain cardboard box, with two layers of thick foam protecting the contents. However, when it is officially released, it will be arriving in a much more decorative box. What I really like about Brinyte is the fact that they are taking on board what their customers are telling them. Anyway, without further ado, here is what I received in my package!

The PT18 comes with a tactical ring and clip combination. This is the first time I have seen a combination like this before. There is a point on the ring, allowing you to attach a lanyard if you so desire.

Now, one thing that I don’t really like about pocket clips: if you twist them or take them off, you risk scratching the body. There is an obvious solution to this problem and Brinyte are the first company (that I am aware of) to have utilised it: O-rings. Two of them, to be precise. This allows you to twist or remove the clip without detracting from the aesthetics of your PT18. Brilliant!

First Impressions of the PT18 Oathkeeper.

When I first say photos of the PT18, I thought that it was going to be huge! I was a little worried that it would be too big for EDC (everyday carry). However, when the PT18 arrived, it was the perfect size. A little on the large size, but certainly not too big to carry. The Oathkeeper is constructed of the usual aircraft grade aluminium with type-III hard anodising (that seems to be the standard when it comes to flashlights). On paper, the PT18 has a one metre drop resistance, but in fact, it can be dropped from heights of two metres (which I have tested). However, although the internals won’t be damaged, the aesthetics will be all scratched and possibly chipped, so don’t drop it intentionally!

The Brinyte PT18 Oathkeeper Flashlight has an IP6-8 rating, meaning that it is highly resistant against the intrusion of dust or dirt. It is also waterproof and fully submersible up to a depth of one metre. This is a must have for any flashlight marketed towards police / law enforcement, as there will come a time when you get soaked, whether it be through heavy rain or some other way. When the Oathkeeper is released it will come with a holster, however Brinyte are developing the holster based on suggestions that reviewers provide, which I like a lot. The PT18 utilises a perfectly centred CREE XHP35 LED, allowing it to pump out 2,000 dazzling lumens. A deep, smooth aluminium reflector has been used. This allows the Oathkeeper to throw up to 360 metres. Below is a table that displays all the modes and run times.

The beam cuts through fog amazingly. I wish a had a photo to demonstrate this, but the nights have been rather clear recently.

One of the things I like about a flashlight is the markings and logos, or rather a lack of them. If you are making a tactical flashlight, then there should be as little writing as possible. Enter the PT18. A small laser cut brand name and logo and the words “PT18 Oathkeeper”.

On the crenulated bezel, the word “prototype” has been engraved. Obviously, when the flashlight is released it won’t have “prototype” laser engraved on the bezel.

Constructed of stainless steel, the bezel that came with my PT18 has been coated with a non-reflective black coating. However, Brinyte have produced a shiny stainless-steel version. What I like about the bezel is that it is removable.

The threads are on the inside of the head, which means that the flashlight looks good with or without it and the threads won’t be as easily damaged if you use the Brinyte PT18 Oathkeeper Flashlight without the bezel. Due to its thickness it can still break glass or be used as a last resort for self-defence even though it isn’t overly aggressive. It is very sturdy and feels well-made.

The PT18 has rectangular knurling on the tail cap and on the head. On other flashlights, the lack of knurling on the battery tube would cause issues. However, the probability of dropping the light in wet conditions is practically zero thanks to the tactical ring. The ring is wide, which makes using the PT18 with gloves easy.

This is very simple. Insert the battery with the cathode (positive terminal) pointing towards the head and tighten the cap fully. Now the Oathkeeper is ready for action!

The tail cap has two switches: the large circular one gives you instant access to turbo and like any good tactical flashlight, also has a “momentary on” feature. That means that if you slightly depress the switch, it will turn on and as soon as you take the pressure off, it will turn off.  The second switch is the strobe switch, which gives you 2,000 blinding lumens of randomly flashing light – perfect for stunning a would-be attacker. The strobe alternates between 15 and 6 hertz. When the flashlight is off, pressing the strobe switch will activate the strobe feature (obviously), but when the PT18 is on, you can use the same switch to change between lighting levels.

A battery indicator is integrated into the side switch. When you turn on the PT18 at first, the indicator will glow for five seconds to indicate the charge left in the battery. The light will be:

To prevent battery wastage, the light goes out after three seconds. Hold the side switch in to turn the PT18 on or off, and quickly press it to cycle through the modes. This is the only switch that can be locked – simply press it three times when the flashlight is off to lock or unlock it. To lock the tail cap, you need to loosen it (known as a mechanical lock). This breaks the flow of electricity in the circuit, and therefore prevents accidental activation.

A Closer Look at the Tail Cap.

Due to the design of the tail cap, the PT18 does not have tail stand capabilities. You can, however, rest your thumb on both switches if the clip is positioned in such a way that it lines up with the charging port, therefore allowing you to position your hand in such a way that your little finger rests on the side switch. Holding the flashlight like this gives you the ability to strike with the head if the need arises, as you can get plenty of downward power.

There is a hole in the tail cap to allow you to attach a lanyard, too.

There is very little that I would change about the PT18. I have, however, some suggestions to improve the Oathkeeper. First: cooling fins. The PT18 does get quite warm on turbo (understandably), so I think some deep cooling fins would increase the run time considerably. Second: more knurling on the battery tube. In wet conditions, this would allow for a better grip. I also think that it would be good if you could choose what beam tint the PT18 comes in, for example warm white, neutral white or cool white. My last suggestion is to create more bezels, with more aggressive features or maybe one that glows in the dark. This would make the PT18 stand out from the other flashlights.

Here are some night shots that I took of the PT18 in action.

If you want the Brinyte PT18 Oathkeeper for yourself, it’s available for purchase only on Amazon. The RRP for this product is £104.00.

Product sample provided by Brinyte in exchange for a detailed, unbiased review.