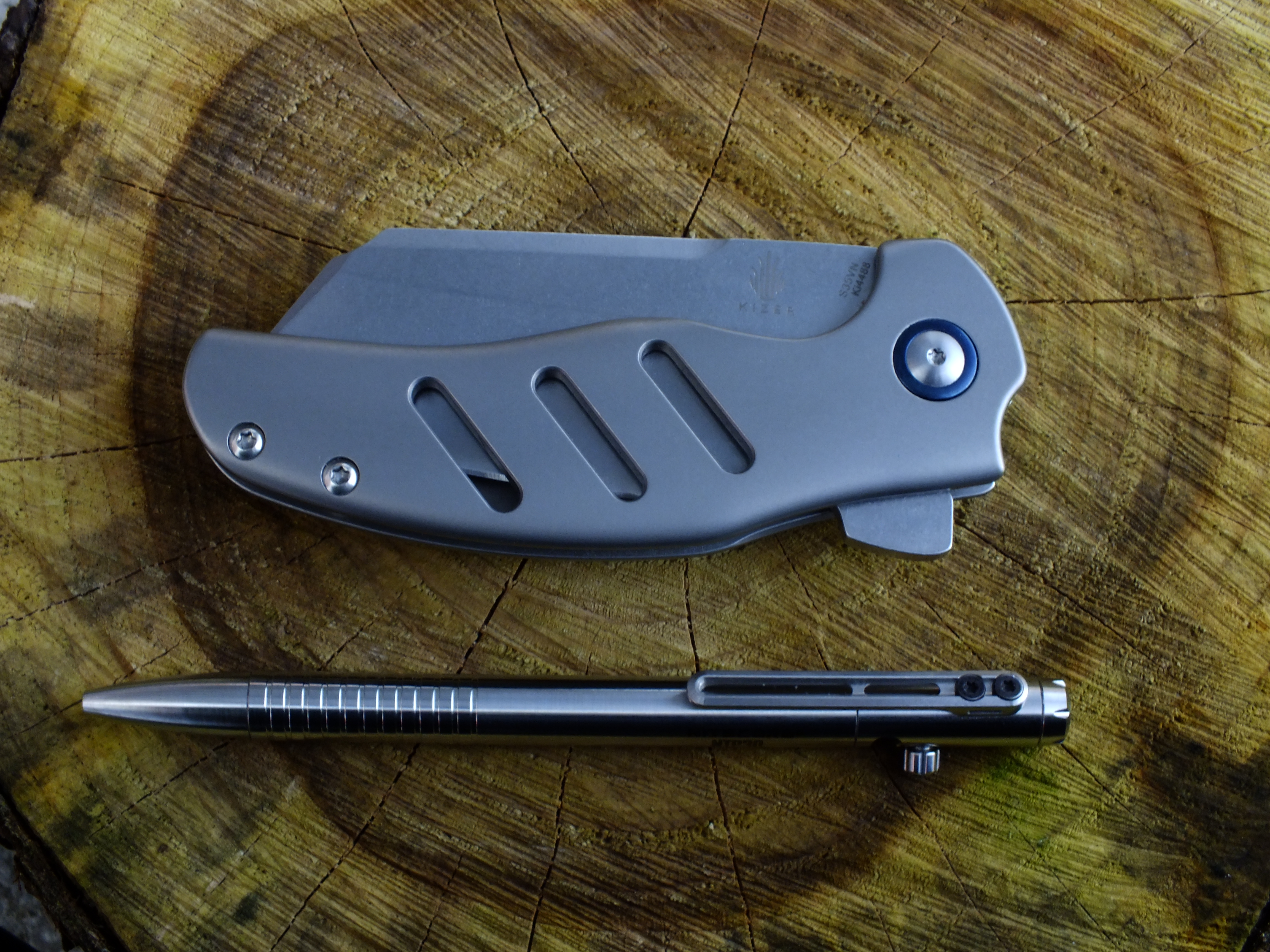 Ever since I was young, I have always been a huge stationery lover. Pens, pencils, sharpeners – you name it. When the Nitecore NTP30 Titanium Pen arrived, it was as if I was young again – my love of stationery rekindled. Utilising a bi-directional bolt action system, everything about this pen screams “class”.

The NTP30 arrives in a matte black cardboard box with an image of the NTP30 in silver, along with the words “NTP30 Titanium Alloy Tactical Pen” in silver too. Refined and simple, the box is aesthetically pleasing, which is important, as the packaging is what people initially base their thoughts about a company on. When I opened the box and first handled this pen I thought to myself “This is the type of pen that signs million-dollar deals”. It is a perfect pen for businessmen who like to travel light and travel safe.

Inside the box, you receive:

A high-quality Schneider Gelion 39 cartridge is already inside the NTP30 – no extra refill is included in the box. The ink is waterproof, smudge-proof and I have also been able to write upside down with it. An exquisite pen with a cartridge that can handle everything that Mother Nature throws at it – a perfect combination!

Constructed from a TC4 titanium alloy, the NTP30 boasts an amazing resistance to corrosion, as well as scratches. Each part has been made by a CNC (computer numerical control) machine, which means that each piece will be flawless in design, with very high tolerances.

The NTP30 is quite small in comparison to other pens. However, there is still a pleasant weight to it. Not too light so that it feels cheaply made and not too heavy so that it feels like you’re carrying around a rod of iron. Now, the main attraction and unique selling point of this pen is definitely the bidirectional bolt-action system. It is very smooth to operate and doesn’t have as much of a “click” sound as traditional pens. Push the bolt down and to the left to engage the Schneider Gelion 39 cartridge.

How to Use the Nitecore NTP30 Titanium Pen.

Pushing it up and to the right engages the tungsten carbide insert. If you need to remove the cartridge, remember to engage the glass-breaker (up and to the right), otherwise the spring will shoot out and you will have to spend ten minutes looking for it as I did. The same goes for the glass-breaker – if you get nosy and decide to have a peek inside, engage the cartridge (down and to the left). This will prevent the spring shooting out, alongside the tungsten carbide insert.

A Closer Look at the Bolt.

Here’s a photo of the bolt deconstructed:

Although the concept seems complex, the actual design is not. The system is comprised of four, technically five parts: the finial, the spring, the tungsten carbide insert, the barrel and the rod that screws into the barrel (the bolt). The finial prevents the spring from shooting out when you engage the glass-breaker and provides a surface for the spring to press against, which means that there is no rattling.

The tungsten carbide is commonly used in metal-cutting industries and it is capable of breaking glass. Now, when comparing it to the NTP20, the first thing that I noticed about the NTP30 was how pointy the insert was. It is pointy enough to be used as a scoring tool and I have no doubts about its glass-breaking capabilities. The tungsten carbide insert measures 89HRA – 92.5HRA on the Rockwell scale. The Rockwell test determines, based on indentation tests, the hardness of a material by measuring the depth of penetration of an indenter under a large load compared to the penetration made by a preload. Known for being robust, tungsten steel ranks second to diamond only.

Fastened via a pair of black torx screws, a very lightweight clip allows you to attach the NTP30 to your pocket. The clip is very stiff, so you don’t have to worry about losing your pen.

The body of the NTP30 features anti-slip grooves. These are much less aggressive than those of its predecessor, the NTP20. The shallow rings cut into the body make for a very minimalist approach. Sometimes, less really is more, especially with a classy pen like the NTP30. Don’t let that fool you though! They may not look like much, but they certainly serve their purpose! Writing with this pen has been a joy – even in gloves. Not that long ago, the temperature outside was -7. I was writing something down with gloves on and I had no issues at all. The bolt was a little bit hard to engage, but that is because the gloves were quite big.

The NTP30 is compatible with nine different refills:

There are a few things however that I would change.Firstly: I found that over time, the rod that screws into the cylinder came loose. It would be great if there was a way to prevent this. The other thing I noticed was the clip – if you pull it out of your pocket quickly, it has a tendency to snag. To prevent snagging or ripping, a ceramic ball could have been utilised (for example, like the NTP20). All things considered, if you can afford it, the NTP30 will make your friends envy you every time they see it. It truly is an every day tool for the one who has it all.

If you want the Nitecore NTP30 Titanium Pen for yourself, it’s available for purchase only on the Nitecore website. The RRP for this product is £114.95.

Product sample provided by Niecore in exchange for a detailed, unbiased review.