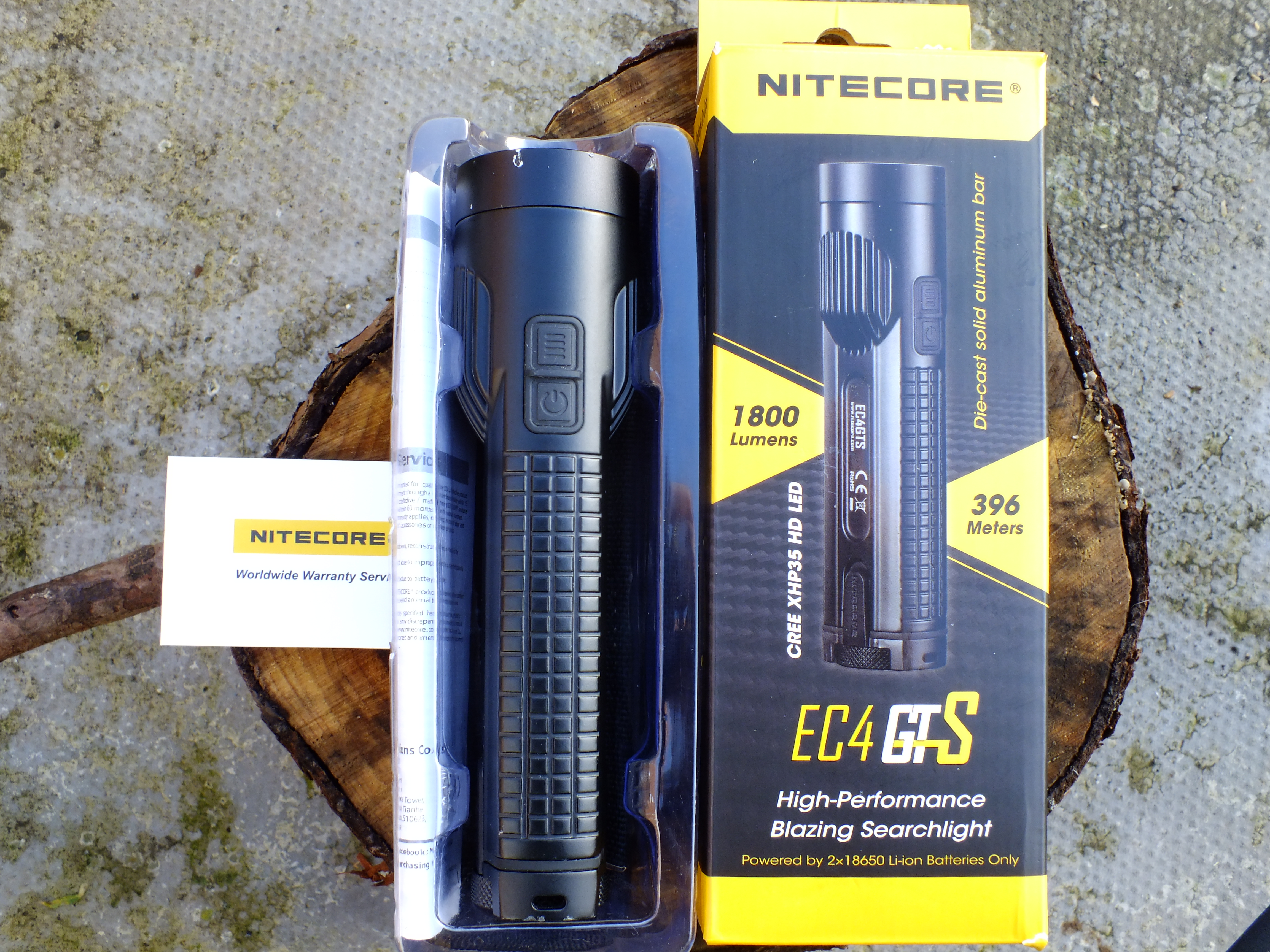 Hello everyone! Today, I will be reviewing the Nitecore EC4GTS Flashlight, one of their updated flashlights with an improved brightness, run time and more!

The Nitecore EC4GTS is the updated version the EC4 (which has been discontinued). This particular model is compact and lightweight, making it ideal for carrying in your pocket. I believe it is aimed at “urban explorers” (E – explorer series), security personnel and obviously lovers of EDC and flashlights. Now, I’m sure some of you have realised that this is similar to other products in the “Explorer” series, so here’s what Nitecore changed…

The Unboxing of the Nitecore EC4GTS Flashlight.

The EC4GTS comes in a cardboard box with some photos, detailing the flashlight’s possible uses and other useful information. I prefer plain cardboard boxes, as it keeps the overall cost down, but that’s just my opinion.

The Nitecore EC4GTS is powered by two 18650 high drain rechargeable batteries. They are connected in parallel – there are several advantages for this. For example, in a parallel circuit, the voltage remains the same in both batteries but the power increases, meaning the batteries last longer. Also, if a flashlight requires two batteries, connecting them in parallel makes the flashlight more compact, which means less material is used to produce the flashlight, keeping costs down without compromising quality. This also makes the flashlight lighter.

The EC4GTS is constructed from die cast aluminium. Die casting produces durable parts with thinner walls, smoother surfaces and closer dimensional limits (i.e. tighter tolerances). The top and bottom surfaces of the body feature square knurling which has been designed in such a way that any moisture will run off, increasing the ergonomics of the flashlight. The tail cap features rough diamond knurling which allows the user to get a better grip when twisting it.

I Can See the Light.

Nitecore have used a CREE XHP35 HD LED, coupled with a deep, smooth, aluminium reflector. This allows the EC4GTS to have a maximum lumen output of 1,800 lumens, a maximum intensity of 39,200 candelas and a 396 metre throw. Turning on the EC4GTS couldn’t be easier. Simply insert the batteries and press the “power” switch. Next, hold the “mode” switch (above power switch) to instantly access turbo or press it quickly to cycle between the modes. To access the three special modes, when the flashlight is off, double tap the mode switch quickly. Pressing the mode switch when the light is in strobe mode (the first of the special modes) will allow you to cycle between the other modes.

Here is a table of information, such as run times and lumen output:

The three special modes (strobe, S.O.S. and beacon) all have the same run time, output, throw and intensity as turbo mode.

The EC4GTS is drop-resistant up to one metre and waterproof and submersible up to (or down to?) two metres. If you like urban exploring, or any type of exploring, the drop resistance and water resistance is vital.

There are two switches near the head. They are covered with a grey, translucent, rubber material. Pressing the mode switch when the light is in strobe mode (the first of the special modes) will allow you to cycle between the other modes. The EC4GTS can be locked to prevent accidental activation by pressing and holding both switches until the blue LED flashes once. To unlock, simply repeat this process. Also, a built in power indicator (press the mode switch when the EC4GTS is off) tells you how much battery is left, with

Every brand of flashlight has a common enemy – heat. Therefore, Nitecore have decided to deal with this by implementing deep cooling fins around the head of the flashlight, as well as using an advanced temperature regulation module in the EC4GTS. The fins allow heat to dissipate quickly, protecting the internals and increasing run times. These cooling fins are the deepest I’ve seen to date, and they certainly help the heat to dissipate.

The beam is fantastic for outdoor use. It offers sufficient flood and spill and yet there is plenty of throw – thanks to the deep reflector. For my night shots, I decided to explore the countryside a little (on Google Earth – still counts, right?) and I realised that there was a dam near to where I live. It is a perfect location for beam shots. The only issue is, on a December night, it is absolutely freezing. So cold, in fact, that I completely forgot that one of the compartments on my bag was open and as I lifted it to move to a different location, the EC4GTS fell out. Thankfully, the EC4GTS is drop proof up to 1 metre. Needless to say, I’ll be wrapping up much warmer and keeping a note of what part of my bag is open!

The EC4GTS features large, square knurling on the body, specifically on the “spine” and “belly”. This is incredibly effective, especially in cold, wet, windy conditions when you can’t feel your fingers… (trust me, I tested this!).

However, the EC4GTS features aggressive diamond knurling on the tail cap which allows you to tighten it and loosen it easily, even when wearing gloves.

The tail cap is flat, which means that it can stand upright with no issues whatsoever, should the need arise. However, for me, this specific tail cap is a completely new concept. Sure, it screws/unscrews normally, however, its features are interesting. Here’s why:

Firstly, most, if not all O-rings are circular – not in the case of the EC4GTS. The tail cap has an almost rectangular O-ring which prevents water from getting in and messing up the electronics.

Next, upon removing the tail cap, the first thing you notice is the two “prongs” with the Nitecore brand stamped into them. These slide into two grooves on either side of the EC4GTS, which makes aligning the tail cap easy with gloves, as it decreases the chances of you damaging the fine, lubricated threads.

In my honest opinion, the most important feature is probably the tripod-compatible mount in the base of the tail cap. Sure, not everyone will need it, but it’s nice to know that it is there.

I think Nitecore have done a fantastic job when it comes to the EC4GTS. However, there are some minor rooms for improvement. For example, I think more knurling on the body would increase the ergonomics of the EC4GTS even more. In addition, I think if Nitecore continued the cooling fins the whole way around the head, it would allow the heat to dissipate even more effectively. Apart from that, I’m very pleased with the new, upgraded version of the EC4.

Finally, here are a few night shots I took up at the dam I mentioned earlier:

If you want the Nitecore EC4GTS Flashlight for yourself, it’s available for purchase only on Amazon and on the Nitecore website. The RRP for this product is £81.49.

Product sample provided by Nitecore in exchange for a detailed, unbiased review.